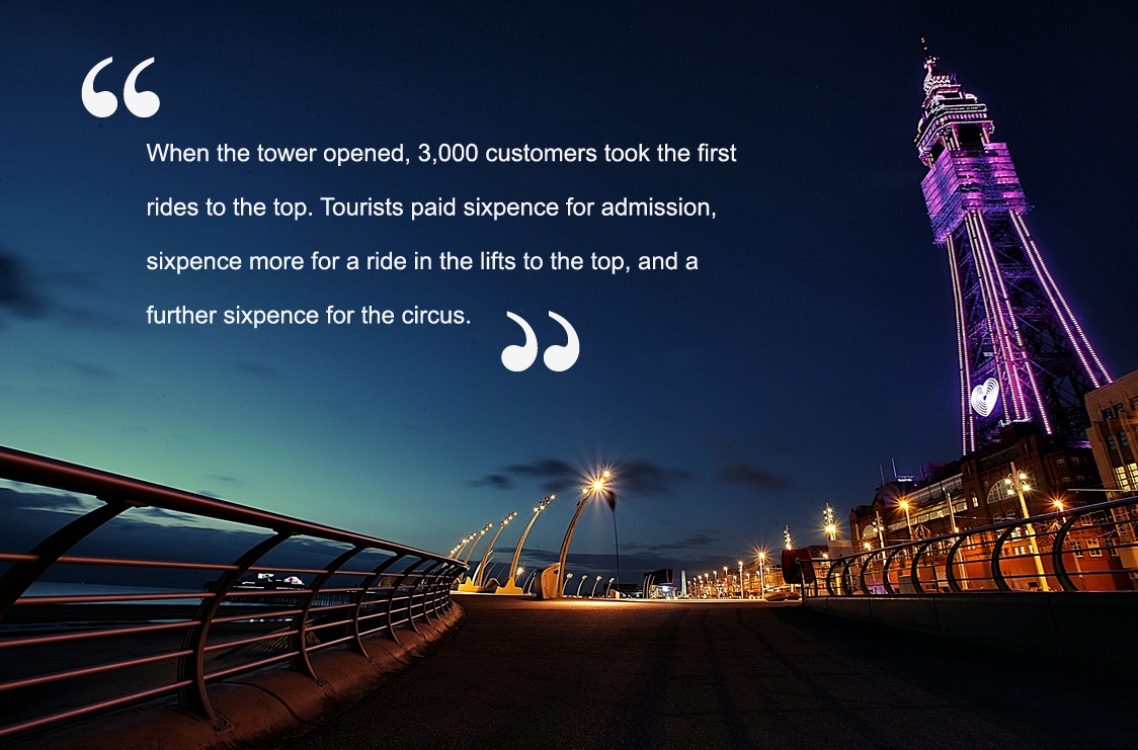 When the tower opened, 3,000 customers took the first rides to the top. Tourists paid sixpence for admission, sixpence more for a ride in the lifts to the top, and a further sixpence for the circus. The first members of the public to ascend the tower had been local journalists in September 1893 using constructors' ladders. In 1897 the top of the tower caught fire, and the platform was seen on fire from up to fifty miles away.

The tower structure was not painted properly during the first thirty years and became corroded, leading to discussions about demolishing it. However, it was decided to rebuild it instead, and between 1921 and 1924 all the steelwork in the structure was replaced and renewed.

On 22 December 1894 Norwegian ship Abana was sailing from Liverpool to Florida but was caught up in a storm, and mistook the recently-built Blackpool Tower for a lighthouse. Abana was first seen off North Pier, and later drifted to Little Bispham where she was wrecked, and can still be seen at low tide. The ship's bell still hangs in St Andrews Church in Cleveleys.

In 1940, during the Second World War, the crow's-nest was removed to allow the structure to be used as a Royal Air Force radar station known as RAF Tower, which proved unsuccessful.

The top of the tower was painted silver in 1977 as part of Queen Elizabeth's Silver Jubilee celebrations. A giant model of King Kong was placed on the side of the tower in 1984. In 1985 escapologist Karl Bartoni and his bride were married suspended in a cage from the tower.

The lifts and winding gear were again replaced in 1992. The same year the tower complex was renamed Tower World and was opened by Diana, Princess of Wales. The tower is usually painted in dark red, except for its centenary year in 1994 when it was painted gold by abseiling painters.

In 1998 a "Walk of Faith" glass floor panel was opened at the top of the tower. Made up of two sheets of laminated glass, it weighs half a tonne and is two inches thick.

In October 2007 a laser beam installed on the tower for the duration of the annual Illuminations was criticised by astronomer Patrick Moore, presenter of The Sky at Night television programme, who said, "Light pollution is a huge problem. I am not saying we should turn all the lights out, that is not practical, but there are some things which are very unnecessary. The Blackpool Tower light is certainly something I do not think we should be doing. I very much oppose it." The beam could be seen 30 miles away; Moore called for it to be stopped. The Centre for Astrophysics at the University of Central Lancashire in Preston said the laser has added to a spiralling problem affecting astronomy.

The tower has transmitters for local FM station Radio Wave 96.5 and some non-broadcast services.

The Tower continued to be owned by the Bickerstaffe family until 1964, when the Blackpool Tower Company was sold to EMI. Since then it has been owned by Trust House Forte, First Leisure and Leisure Parcs Ltd, owned by Trevor Hemmings. In March 2010 it was announced that Blackpool Council had bought Blackpool Tower and the Merlin Entertainment Group would manage it and add various attractions including a new Dungeon attraction and a something similar to the London Eye. The company will also manage the Blackpool Louis Tussauds waxwork museum to be rebranded as Madame Tussauds.

Blackpool is a popular seaside resort, and the beach-front tower is still a major attraction. It is lit during the annual Illuminations, when the town and seafront are decorated with colourful illuminated displays for six miles along the promenade.

You can follow Phil on any of the following social media