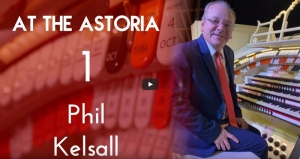 Phil Kelsall MBE at the Astoria

As we all know, the Coronavirus pandemic has put paid to live organ concerts for the time being and Phil's appearances have been cancelled for most of this year, including at the Tower Ballroom (which has been closed since March). One of Phil's cancelled concerts was to have been at the Astoria Theatre Organ Heritage Centre near Barnsley in September.

However, not all was to be lost and Phil was approached by the Penistone Cinema Organ Trust to record instead a programme of music on the 3/18 Compton at the Astoria Centre for distribution through YouTube. Phil readily agreed and on 12th September (the weekend of the originally planned concert) a 'mini' concert resulted, filmed by Kevin Grunill and Declan Poole, with narration by Nigel Ogden. The video is available on our 'About Phil' page (select 'video' from the drop down menu).

Hopefully, we can look forward to the time when live concerts become a reality once again but, for now, sit back, relax and enjoy!

<< Go back to the previous page